This Is The Way They Make Us Bend was made at Cineworks’ Annex analogue production facility in Vancouver, with funding assistance from: City of Vancouver, for the Cineworks Local Artist in Residence Program; Canada Council for the Arts; British Columbia Arts Council; and The Province of British Columbia.

Allison Hrabluik lives and works in Vancouver. In her exploration of narrative construction, Allison's visual practice finds its focus in the voices, rhythms and methodologies of storytelling. Her work includes video, animation, drawing and installation, often to humorous or absurdist ends, with a recent focus on choreography and collaboration with performers and musicians.

Kim Nguyen When something of (emotional, physical, conceptual) value is lost, it is recommended that you retrace your steps. You recall where you used it last, when it most recently came up in conversation, its ...

When something of (emotional, physical, conceptual) value is lost, it is recommended that you retrace your steps. You recall where you used it last, when it most recently came up in conversation, its very last breath. When this thing mattered enough not to be forgotten. We need to follow a familiar path to find this thing, before it slips beyond remembrance. We need that flabby place of pre-forgetting, when you were determined and I was kinder. When the weight of this leg did not feel like the pain of four years, two too long.

Depending on who you ask, there is a theory that we store our memories before the age of four in a mislabeled deposit of our brains. A place that is inaccessible to our adult selves. That time before our verbal life is lost, but only metaphorically. I imagine it is scrawled against a white backdrop, with memory folding over itself in a numerical system that mimics the order of imprint. If we retrace our steps, we can retrieve this abstraction of loss. This flabby place.

To traverse this world alone is, for many, terrifying. What if I were to tell you we are never really alone? Not because of some belief in the collective (we know that society is selective as to who it allows to be alone and to whom it refuses this fate), but that we, as bodies, are not separate entities in this place. We are not self-contained, discrete things that live outside of each other. There is no individualism in this world, only things entangled in each other, whose relations distort time, and whose interactions read as both beginning and end. This tangle of legs, moving in, outside, and on top of each other, is generating its own existence. We are as bound to the limbs without heads as we are to the ones that are affixed to ourselves. Proximity is electric.

Head down, heels up

These legs come from a place of absurdity. Between you and I, strange things occur here (watch your step). There was that time a large exotic cat, gifted by an uncle, died. When a woman’s face was marched over by warts and oxidized growths to a jazzy beat. Or when a vibrational void retreated from darkness (or turned supernova, we will never know). Narrative is flattened or sometimes removed, its elasticity tested by our ability to discern reality from fiction. That salamander has something to say. It is a humour that is mischievous, at times naughty (phallic french fries are, after all, in this repertoire). And this is a place where elegance does not protect characters from frailty, uncertainty, or desperation.

Our bodies are husks of secrets. Only they know our capacity to stretch to our furthest point, our emotional shortcomings, how our organs operate in spite of us, the vitamin deficiencies that pervade our paranoias, our genetic makeup that is concealed first by our insecurities and second by physical alterations, the dull ache in our hips whose genesis remains unknown. Failing knees read like failing feet. Some of the secrets harboured underneath the surface of our skin reveal themselves over the course of our lives. Others lay dormant, coaxed into being under specific circumstances, recognized by a faint creak (this sound will recur the further we creep down the white backdrop). It sounds like your knee failing. Or when secrets rub against other secrets.

Between 2011 and 2013 things disappear. People, mostly. What demanded to be contextualized was replaced with lines and misshapen forms. We ask, how much can they get away with? Movement tells us everything we need to know, they say, and we are on a need-to-know basis. Removing the confines of context places us in the realm of the undetermined—if no one is telling us how to feel, then we are going to have to feel for ourselves (no, that is terrifying). As the years continue, feeling becomes rhythm and line becomes limb. And this performance of feeling becomes forgetting.

If you lean back beyond what is possible, you can see the horizon of that flabby place. From this angle we count legs. One, a dirt road or a backbone, a scrap at the start and a potential scrap at the end. Two, a line of telephone poles, bent over and around each other, collapsed under the big top of resentment. Three, the origin of an ending. Four, the curve of Alaska. Five, a leg for a head that is one leg too many, or one leg short of a set of two. Six, a series of strings that hold together a wretched piano. Seven, one person and presumably one life, patterned by two different people. Eight, a nightshade. Nine, Lilia Podkopayeva. Ten, the phantom arm that tethers you to the suburbs. Eleven, this coastline. Twelve, a thermometer contending with a disobedient needle. Thirteen, today’s 3.84km that was 2.72km two weeks ago. Fourteen, Baryshnikov and Hines in a forgettable film about a Soviet ballet dancer and an American tap dancer, otherwise known as Two Defectors and a Pregnant Rosselini. Fifteen, Podkopayeva, again. Sixteen, two legs strained by the care of another. Seventeen, the ragged edge of that place you have not seen in nearly twenty years. Eighteen, a magnificent sunset.

If the shrinking space between our legs and the retractable seat in front of us is any indication, entanglements can interfere, if not inhibit. Patterns need to be relaxed. The economy of bodies presents itself to us on an everyday basis. We are made to feel vulnerable, to feel measured. And measurement has limitations, determined by systems and patterns that extend beyond the tips of our toes. There are some bodies that are more susceptible, that harbour more secrets, that are required to conceal. Society fails these bodies. Cities fail these bodies. We deny them the right to their bodies. Failing systems read like failing bodies. The burden of this headless leg must be carried home. This is the way they make us bend.

2. Tracing The Outline: On Allison Hrabluik’s This Is The Way They Make Us Bend

Pan Wendt A flat, headless, three-limbed being lurches along a horizontal track – a choreographic score – for just over three minutes. The score runs the body through a series of rotating motions defined by...

A flat, headless, three-limbed being lurches along a horizontal track – a choreographic score – for just over three minutes. The score runs the body through a series of rotating motions defined by the shapes of the cutout forms, the positions of their points of attachment and rotation, the edges of numbered contours. This linear two-dimensional movement is accompanied by a soundtrack of squeaks, scrapes and shuffles that accentuate the rhythm of the body’s travels along the score and its mechanical armature. During the course of the piece, the paper doll-like figure explores the limited range of possibilities afforded to it; obviously these can’t even begin to capture the wide and complex range of movement of an actual body.

This is the body’s movement defined by notation. The mechanical being propels itself, and yet its parts seem to vary between living and dead; one limb will energetically push the movement forward, while another hangs helplessly. This is a form that drags itself around, a picture of a continuum between body as thing and body as energy. In some ways it is a grotesque thing. Both excessive and insufficient, twisting repetitively and recursively as if to accentuate a failure to transcend its simple structure, even as it stops, relaxes, tries again, like a fish flopping to escape from a line. This rigged-together artifice could be read as an abject presentation of life trapped by language – in this case a very specialized choreographic notation.

My initial impression, that the work illustrates the tension between a being with an implied subjectivity and its constraints, between a body and its discursive and other cages, is probably the result of too many graduate school readings of canonical interpretations of Modernism. In light of, for example, Frederick Taylor’s modern hell of bodily control and efficiency, the early twentieth-century feel of some of the work’s component parts leads me to some dark associations. But even if there a Sisyphean mood to the piece, especially when at the end the exhausted creature, after being put through its paces, shuffles and drags itself backwards towards its starting point, This is the way they make us bend embraces a lighter kind of absurdity, not one of desperation, agony or imprisonment.

The spinning creature, after all, has “personality.” As we follow its awkward movements, we begin even to empathize with it. Body language is sometimes said to reveal more of a person’s character than facial expression. We are witnessing a moment when the body language of choreographic notation spins on its own axis, wakes up and starts moving, detaches from the ground of iconic description and begins to stake out a world, where real things happen that no longer represent anything. Escaping the condition of a sign, with its arbitrary relationship to body and gesture, the tension and release of the paper figure’s journey outlines an autonomous being. Its dance is stiff and jerky, but it is also light, a mere traced overlay upon the dense, sinuous bodies that are implied, and an open-ended sort of discipline, a regime of quickened, floating repetition and exchange.

Perhaps it inherits the language of Andy Warhol’s dance diagram paintings, which sidestepped the existential despair of thwarted masculine subjectivity. At this particular historical moment, in any case, reference to the mechanized body no longer carries the same disturbing associations it once did. Robots, the revivified flesh of the Frankenstein monster, industrial machinery, the dystopian choreography of Metropolis; these once nightmarish images seem almost quaint now, distant from contemporary scenarios of social control, characterized by the permeability of the parasite-ridden subject. The conventions of dance notation, codified in the early 20th century by the Russian ballet at a time when the industrialization of the body was a pressing issue, now seem likely a purely aesthetic construct. And as presented in This is the way they make us bend, their materiality signifies a kind of resistance to old narratives, or at least an allegorical relationship to them.

In the end, the ominous “they” and “us” in the title is subsumed by the dance itself. The piece is a machine that makes stored gestures move. If we are ambivalent about whether subjectivity is to be struggled and strained for or gleefully cast off like a cloak, the idea that our bodies deploy a limited repertoire of gestures is seductive as well as scary. Here it is captured as an open-ended question with its own autonomous force. 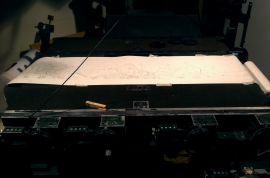 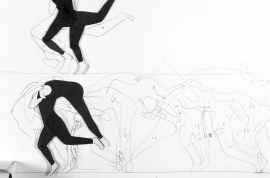 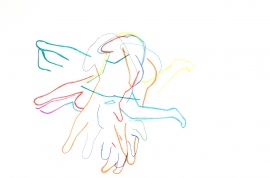 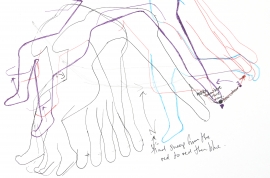 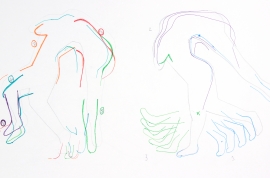 Your application has been received. You will be notified by email when your account setup is ready.

If you've lost your password, enter your email below to reset it.